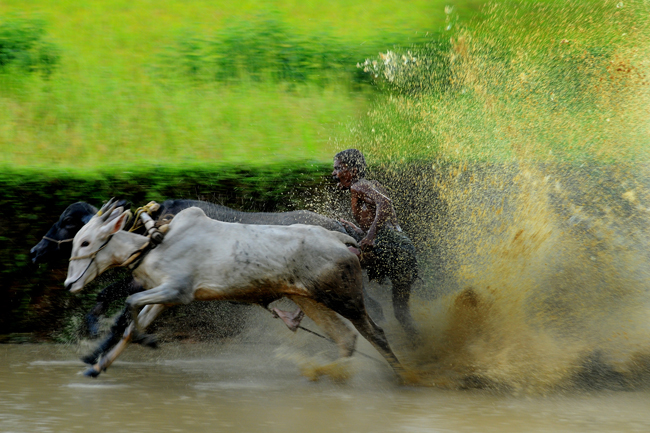 You may be acquainted with the bull run of Spain, but there is an event on similar lines, which is a traditional sports item in Kerala. Bull race is conducted in freshly ploughed and water filled fields after harvest. Each team consists of two bulls and three men to control them. It provides huge adrenaline rush for the participants as well as the viewers. The water makes sure each participating team makes a big splash and adds to the dramatic impact of the race.

The bulls participating in the race are specially groomed, fed and prepared for the event months in advance. Usually they are bred for this purpose exclusively and are not used in regular agricultural duties. The two bulls in one team are trussed together using plough equipment, which also allows one person to ride on it. Two other people run alongside the bulls to make sure they do not stray off the intended path. The traditional way of twisting the tail send the bulls on their way as soon as the racing time starts and they complete the stipulated rounds of the field clocking the time taken to do so.

Two centres where the bulls race held yearly are Chithali Village in Palakkad and Anandhappalli in Pathanamthitta.